6 WAYS TO BENEFIT FROM READING GENEALOGIES

Most Christians inwardly, if not outwardly, groan when they arrive at a genealogy in their Bible reading. This is a shame. The genealogies are wonderful and I love studying (not just reading) and preaching them.  They are compressed histories of God’s faithful and loving dealings with his children, and, of his war against Satan. The genealogies in Scripture are so important that it may rightly be said that we cannot fully see the glory of the metanarrative (i.e. the storyline) of the Bible without them. Here are six tips for reading genealogies that I think will benefit the diligent reader:

Do not simply pass them by.  It make take several days to carefully work your way through a particular genealogy in Scripture, but with good cross references, a concordance or online Bible, you will be able to make connections and learn vital lessons you never did before.  For example: the genealogy of Exodus 6:14-25 will show us that Korah who led the rebellion against Moses in Numbers 16 was actually Moses’ cousin. How is that for a family dynamic?

2. Pay Attention to Every Word

Some details may pass us by in reading, but there are no wasted words in Scripture. Ex 6:15 “The sons of Simeon: Jemuel, Jamin, Ohad, Jachin, Zohar, and Shaul, the son of a Canaanite woman.” This insertion of Shaul’s lineage is unique in the context and theologically important. Does it point to Simeon’s unfaithfulness to the covenant standard (which would later be codified in the Mosaic law - Exodus 34:15-16 & Deuteronomy 7:3)? Or does the nameless Canaanite woman fit the mould of the Tamar/Rahab characters in Matthew’s genealogy of the Christ? After all they named their child Shaul – that is, “asked of” or “prayer’s answer.”

3. Pay Attention to Every Missing Word

Most (not all) genealogies contain some details of ages and time. Two genealogies which contrast each other are those of Cain (the line of Satan) and of Noah (line of Christ). Read them both in Genesis 4 and 5 and spot the differences, then ask yourself why have these differences been recorded?

4. Consider How They Remind Us of Life and Death

They point us to the cultural mandate “be fruitful and multiply” (Gen 1:28) in the midst of a sin-wracked world.  Life is given by God, even as he commanded it. Death is also such a reality – the words “and he died” which appear in Noah’s genealogy (Genesis 5) remind us that this age is not our ultimate destiny,

5. Consider How They Present to Us to Two Seeds

In the garden God set in opposition the seed of the woman  - Christ – and the seed of the serpent – Satan.  These are profoundly evident as you read genealogies.  Exodus 6 reminds us of this as we witness, Korah, Nadab and Abihu all of whom the Lord destroyed, in the same line as Moses, Aaron and Phinehas (the good one of Numbers 25 and other places). Genealogies come to their zenith in the gospels of Matthew & Luke where we find the true seed – Jesus Christ. Tracing his lineage is a remarkable exercise of God’s faithfulness.

6. Consider How They Present to Us a Faithful, Promise-Fulfilling, Covenant Keeping God

They present to us a line of sinners, saved by grace–all the way to the great genealogies of Christ in Matthew 1 and Luke 3. As we are presented with rotten, sinful, deceitful, adulterous men and women in the genealogies, we are reminded that covenant status does not save, faith alone in the Christ does. In this way, we learn to treasure God’s faithfulness to us and our children after us.

Additionally, we observe this faithfulness when God condemns wickedness in the covenant line. Korah, swallowed up by the earthquake of judgment produced three sons who gave birth to the sons of Korah. These men (i.e. the Sons of Korah) were responsible not only for the care of the Tabernacle, but also the penning of many beautiful and inspired Psalms. Genealogies can serve as valuable sources of assurance to the doubting Christian--they help build our faith in the gracious and all-sufficient Christ.

We get out of genealogies from what time we are willing to put in. If we are prepared to spend the time, do the work and be guided by the Spirit, we will be presented with potted-histories of God’s kindness to man. So we mush read the genealogies of Scripture and study them. They, like every other part of Scripture, are profitable for doctrine, reproof, correction and instruction in righteousness, that you may be made perfect, equipped for every good work  (2 Timothy 3:16).

We had a blessed time on our very first annual church fellowship trip. We assembled and embarked our coach at Tescos Llansamlet. We were kindly allowed  to park at the store. A number of friends travelled by car. We enjoyed a coffee/tea stop on the way, arriving at Clarbeston Road for our first talk. It was good to join with friends at the Bethany Evangelical Church. Dr John Aaron spoke about the life and ministry of Howell Davies who became known as the Aposle of Pembrokeshire. He was used of God to lead the work of the Calvinistic Methodists in that region.
We then headed for Llys- Y-Fran resevoir where we enjoyed an excellent lunch. The children had opportunity to expend some energy and a number enjoyed a walk near the lake.
We then made our way to Nevern where Mr Aaron spoke in the Nevern Church about a lesser known minister, the Rev David Griffiths. Unlike Howell Davies, he remained in the established church.
A tea was taken in the village and we left to arrive at Llansamlet by 8pm. We are very thankful  to Mr and Mrs Gledhill for organising our day and for the ministry of Dr Aaron. Plans are already afoot for next year, subject to the will of God.

Posted by willbewill at 04:19 No comments:

On Friday the 27th of June we hosted another joint youth rally at our sister church, Margam Road Evangelical Reformed Church. We were pleased, once again, to welcome our friends from Tabernacle Cardiff. We were also joined by a small contingent from the Afan valley.
These services provide opportunity for youngsters to meet each other and , we trust, to form lasting friendships. Many Christian young people feel isolated and under pressure in an increasingly ungodly environment.
We were delighted to welcome the Rev Jonathan Munday from Exeter  Reformed Baptist Church. We have valued his ministry in the past and prayerful support. He preached helpfully from 1 Peter 1 vs 18 and 19 on the work of Christ in redeeming His people. He referred to what we are redeemed from and the price of our redemption, the blood of Christ.
After the service we enjoyed refreshments in the school room and further fellowship together. Mr Munday then undertook a long journey to Kent to preach on The Lord's Day, breaking his journey at Reading. 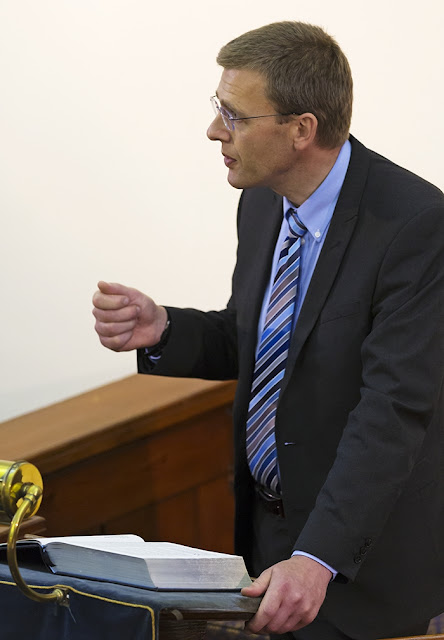 Posted by willbewill at 04:18 No comments:

Visit from the Rev Dafydd Morris of the Trinitarian Bible Society

Visit from the Rev Dafydd Morris of the Trinitarian Bible Society

On Tuesday 24th June 2014 we were pleased to receive a visit from our good friend the Rev Dafydd Morris who is the representative for the Trinitarian Bible Society in Wales. We used the Mary Cave Centre for this meeting to accommodate all who would come. He spoke helpfully about the bitterness and the sweetness of The Word of God from Revelation 10 v10. Mr Morris then went on to refer to the important work of translating and distributing the scriptures ensuring that this work is based on uncorrupted texts. We rejoice to hear of the apparent hunger for The Word of God in other countries. 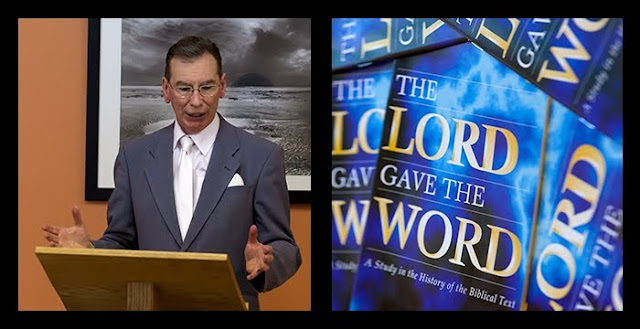 Posted by willbewill at 04:15 No comments:

Visit from the Rev David Patterson of The Protestant Truth Society

Visit from the Rev David Patterson of The Protestant Truth Society

On the Lord's Day March 23rd 2014 we were blessed with a visit from The Rev David Patterson who is The Director of The Protestant Truth Society . He preached at Margam Road in the afternoon and at our evening service in Swansea. At our after church fellowship meeting he spoke about the work of the society. He asked us to especially remember Scotland at this time and drew attention to the country's spiritual state. Encouragingly, the weekly bible study at the P.T.S head quarters in Fleet street appears to be growing, with a number showing a real desire for God's Word. Mr Patterson lives in Northern Ireland. 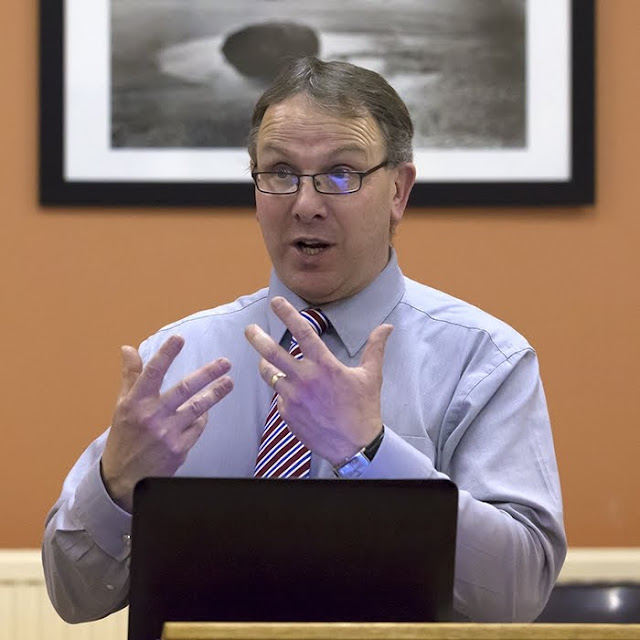 Posted by willbewill at 04:12 No comments: 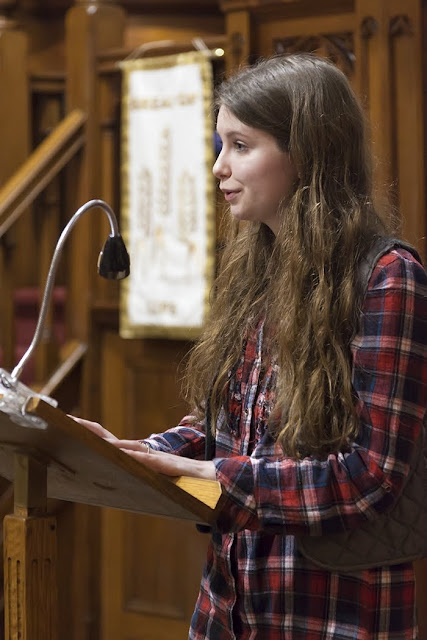 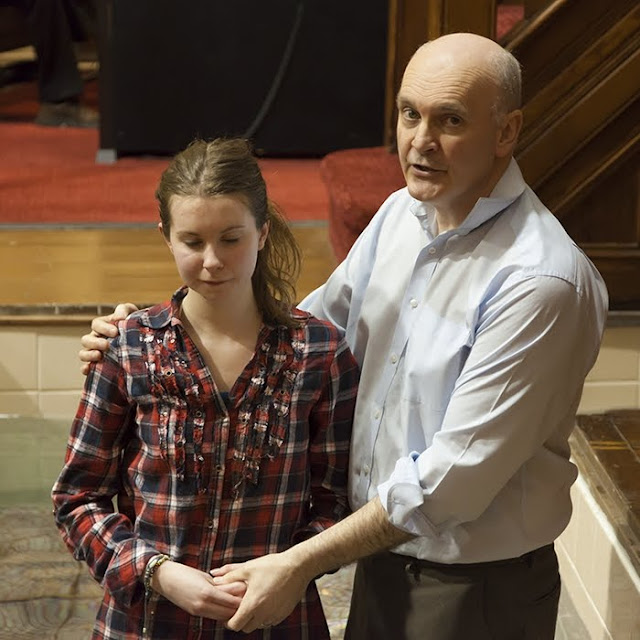 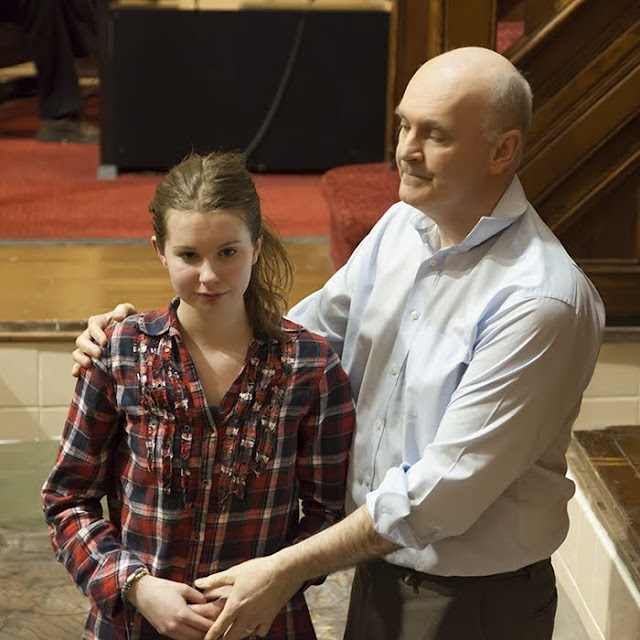 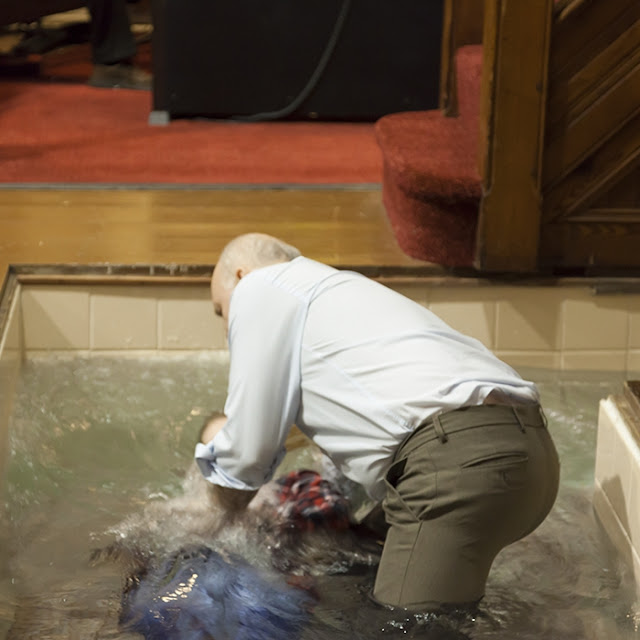 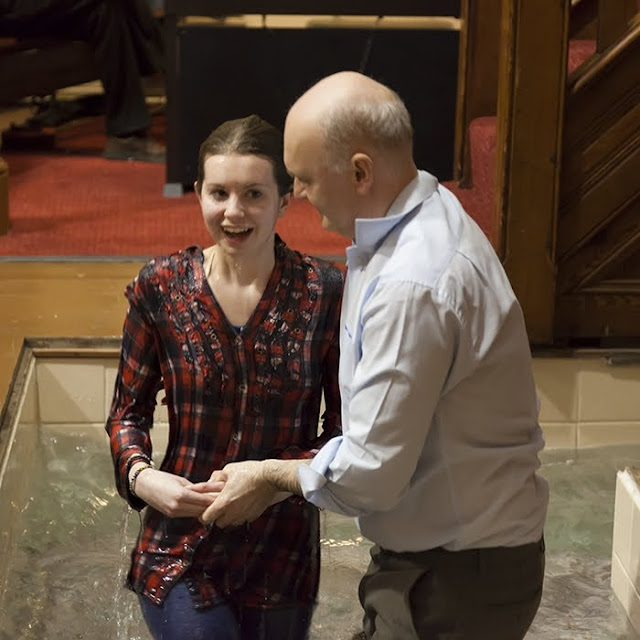 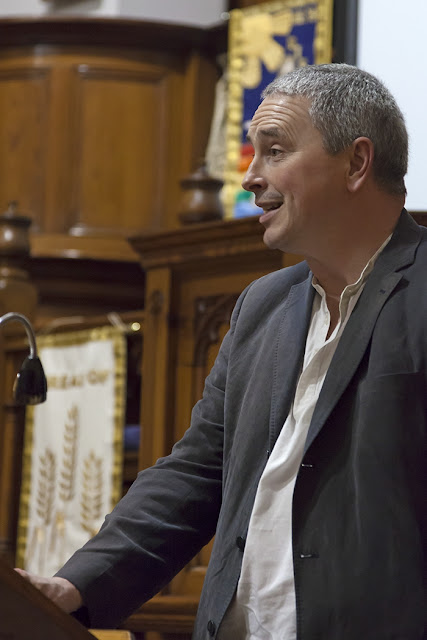 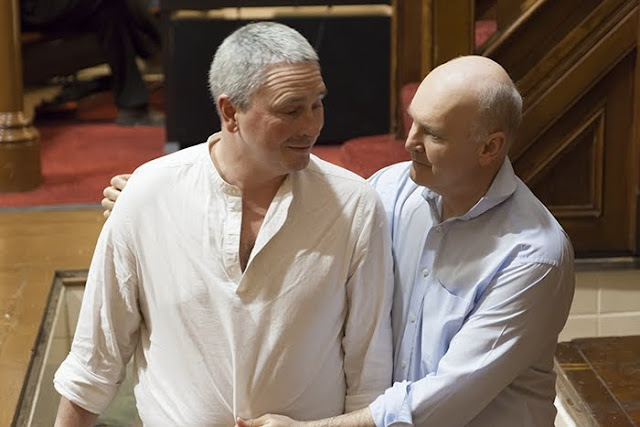 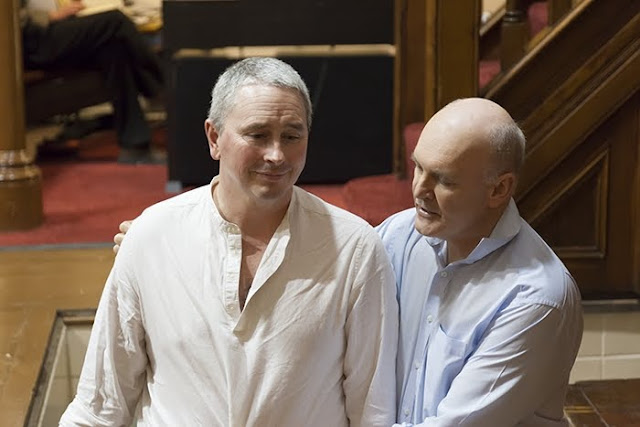 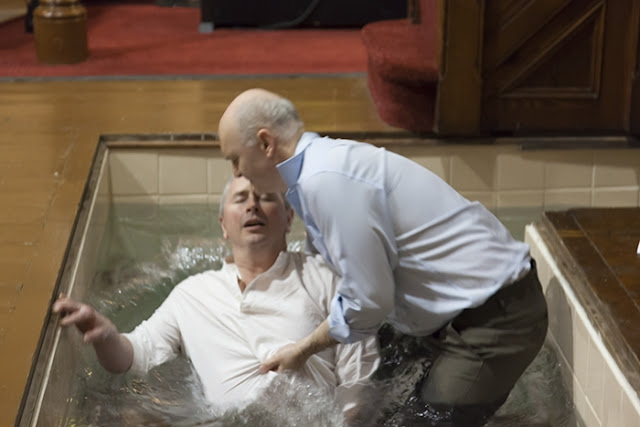 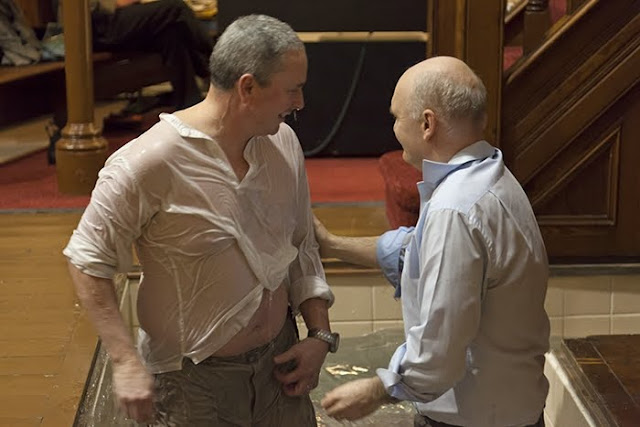 Posted by willbewill at 04:09 No comments:

We give thanks to The Lord for His goodness, as under His Hand we officially constituted as The Swansea Evangelical Reformed Church on Monday evening 20th January 2014, with 24 founding members.The Rev  Vernon Higham prayed for the fledgling church and Rev Dafydd Morris preached most encouragingly on "The Glory of Christ in The Church". A goodly number were in attendance to encourage us.

On 16th February 2014 Swansea Evangelical Reformed Church re-located for Sunday services to the Mary Cave Day Centre, Walters Street, Manselton, SA5 8PZ. This is accessed via a short lane at the rear of Christ Well United Reformed Church.
Posted by willbewill at 04:54 No comments: 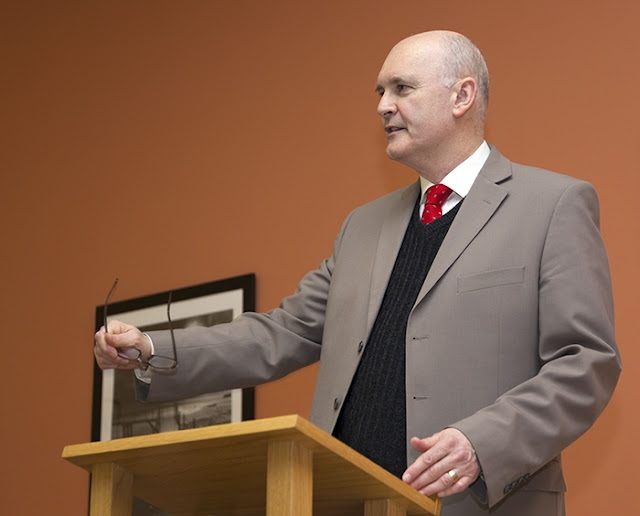 Posted by willbewill at 03:54 No comments: